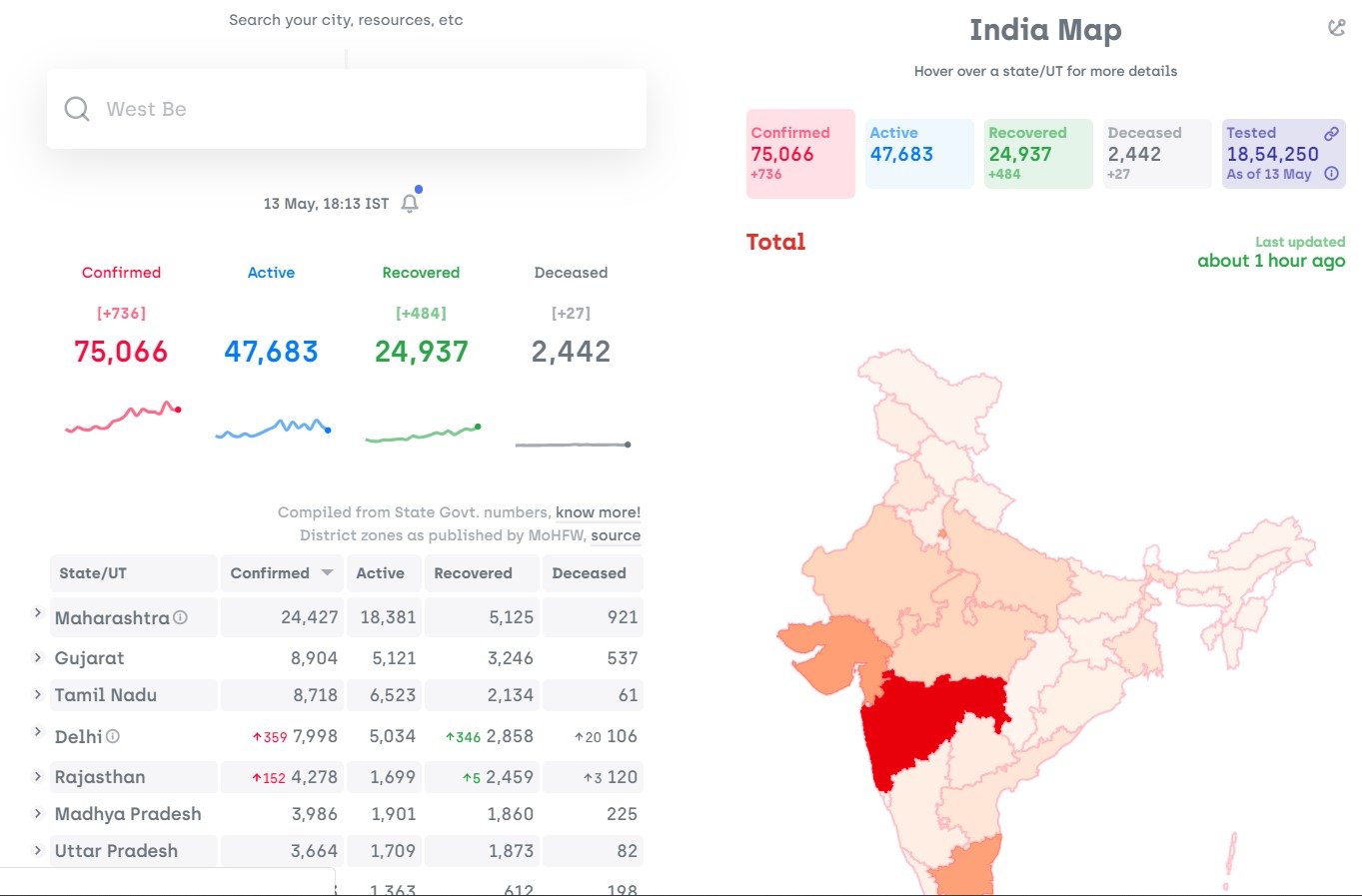 The report of 3610 people came positive on Tuesday. The highest number of 1900 patients in the country was cured in the last 24 hours. Earlier, on May 10, 1669 people recovered and returned home. Thus, 359 new cases came to Delhi on Wednesday. Also, 346 have recovered. These figures are based on information obtained from covid19india.org and the state government. According to the Union Health Ministry, 74,281 people are infected in the country. 47 thousand 480 are undergoing treatment. 24 thousand 386 have recovered, while 2415 people have died.
Updates

In the last 24 hours, 41 CISF and 13 BSF jawans have tested positive.
The first corona report of five newborns of five infected women admitted to Jacqueline Hospital in Kota, Rajasthan has come back negative. These children are kept separately in the ward of the new hospital along with the women of the family. The hospital staff is delivering breast milk to these babies. Everyone was suspicious of these babies because the babies stayed with the mother after delivery and also drank milk.

69 districts in 21 states have been selected to track the community transmission of corona in the country. According to the Indian Council of Medical Research, antibodies will be tested in the district. One sample will be taken from each household in 10 cluster area in a district.

Jharkhand Health Secretary Nitin Madan Kulkarni on Wednesday said a man who reached Ranchi on Monday night in a labor special train. His corona test has been positive. With this, the number of infected people in the state has gone up to 173.

The Shanghai Cooperation Organization is meeting on Wednesday. In which External Affairs Minister S. Jaishankar will be involved. In particular, the fight against the corona virus will be discussed. All of these will connect to each other via video conference.

Status of States Madhya Pradesh, Infected: 3986- 201 new cases were reported here on Tuesday. Corona transition in the country is projected to peak between June-July. It is believed that there will be more than 80 thousand patients in Madhya Pradesh at that time

Maharashtra, Infected: 24427- 1026 cases were reported here on Tuesday. A committee of the Maharashtra government has decided that 50 per cent of the inmates in Arthur Road Jail will be released on temporary bail or parole after the corona report of 100 inmates came positive. The committee did not specify for how long the prisoners would be released. Uttar Pradesh, Infected: 3664 - 91 cases of corona were reported here on Tuesday. The impact of the transition has spread to 74 districts. Only Chandauli has survived. Out of the total patients, 1184 have been admitted.

Rajasthan Infected: 4126- Here on Tuesday, the infection came up against 138 new cases. 32 were found in Udaipur, 22 in Jaipur, 05 in Kota, 02 in Jhunjhunu, 1-1 in Pali, Churu, Sikar, Ajmer, Chittorgarh, Hanumangarh and Sikar. Corona has killed 117 people so far in the state. At the same time, the Air India headquarters here has been closed for 2 days. A peon has been found infected here. The company said all employees, including chairman and MD Pradeep Singh Kharola, would work from home.

Bihar, Infected: 830- There were 81 new cases of infection here on Tuesday. Of these, 14 patients were found in West Champaran, 16 in Khagadia, 13 in Rohtas, 9 in Begusarai and 7 in Patna. Union Minister of State for Health Ashwini Chaubey said steps are being taken to increase testing capacity in the state.