Air India's 5 pilot corona has been found positive. Most recently, they flew to China on cargo flights. He underwent a pre-flight test 72 hours before taking off

The number of infected people in Maharashtra crossed 20,000, with 1,165 patients found on Saturday
There will be a total lockdown in Kerala every Sunday from today till further orders
New Delhi. There are 63 thousand 347 corona infected in the country. On Sunday, 381 cases were registered in Delhi, 50 in Andhra Pradesh, 33 in Rajasthan and 18 in Bihar. Earlier this Saturday, 2951 patients of Corona were admitted. 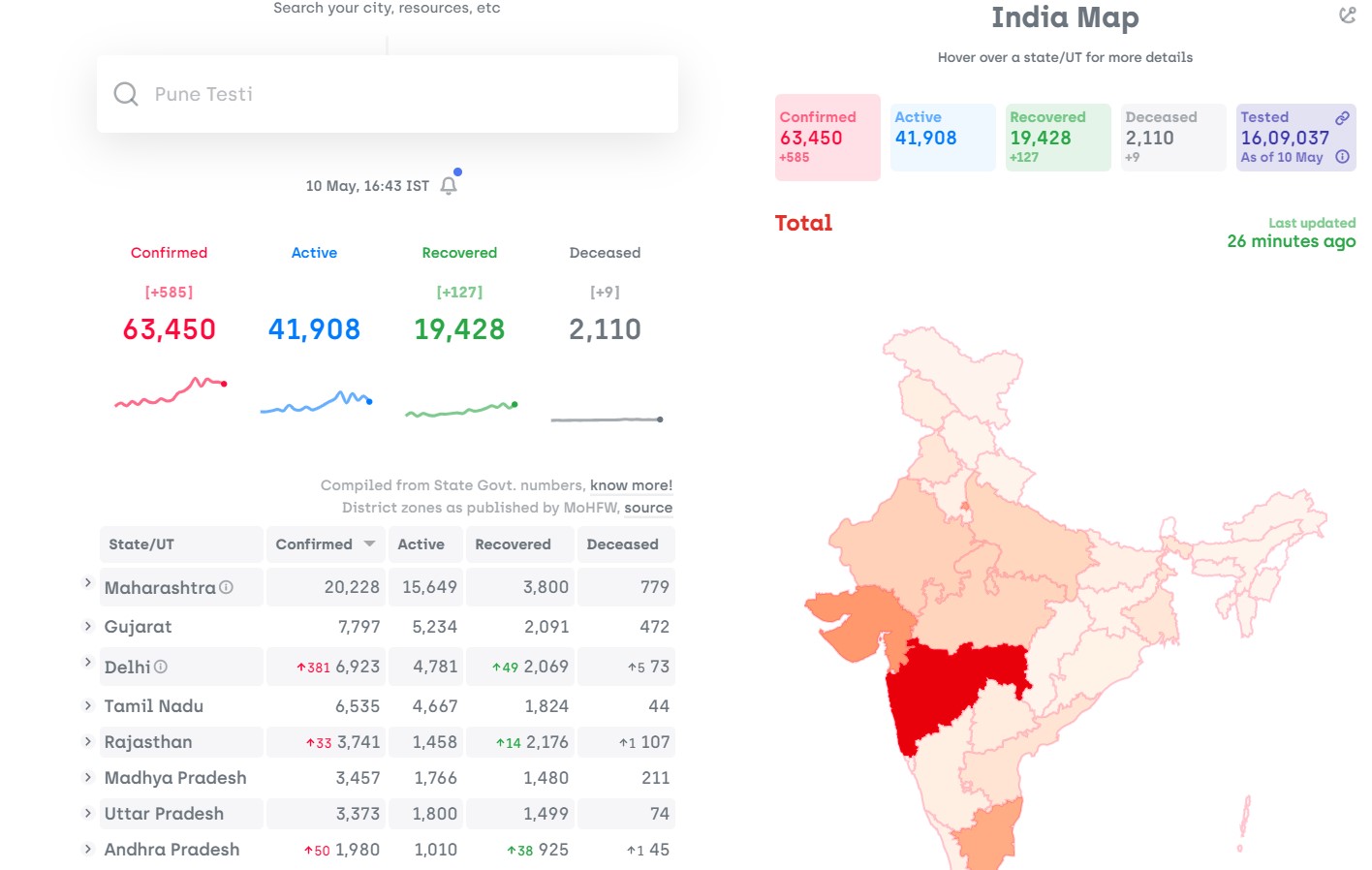 These figures are based on information from covid19india.org and state governments. According to the Union Ministry of Health, there are 62,939 infected patients in the country. 41 thousand 472 patients are undergoing treatment. 19 thousand 357 patients have recovered, while 1,982 patients have died.

Important update regarding Crecover
Air India's 5 pilot corona has been found positive. Most recently, they flew to China on cargo flights. Sources close to the company said all five pilots showed no symptoms. He is currently in Mumbai. He underwent a pre-flight test 72 hours before taking off.
Chariot preparation work has been started for Puri Rath Yatra in Odisha. The 9-day festival will start on June 23. According to an official of the Jagannath temple administration, the central government has given its approval with certain conditions. 72 workers have been hired for this work.
Boat service has been resumed from Brahmaputra Ghat in Guwahati, Assam after relief in Lokdau. An employee of the water transport department told the news agency that all the guidelines were being followed. Those who come without wearing a mask are not being given tickets.

Madhya Pradesh, Infected-3477 20 20 new cases came up in Bhopal on Sunday. It also includes former BJP MLA and current Congress leader Jitendra Daga. The number of infected people in Bhopal has reached 724. Other members of Daga's family also complained of colds and coughs. His report could be positive by evening. During the lockdown, Daga met several Congress leaders. Jahangirabad, on the other hand, has now become the largest hot spot in the region. 165 infected have been found here.
Maharashtra, Infected-20228: Maharashtra Police on Sunday said that 786 policemen of the department have been infected with Korona. 703 of them are undergoing treatment. 76 police personnel have recovered. There have been 200 incidents of assault on police during the lockdown. 732 accused have been arrested in the case.

Rajasthan, Sankramit-3741: 33 cases of Sankramit have come up on Sunday. Of these, 10 patients were found in Japur, 9-9 in Udaipur and Kota, 2-2 in Ajmer and Pali, while 1 patient was found in Dungarpur. There were 129 new cases of transition in the state on Saturday. Corona transition has been confirmed in 39 super spreaders in Jaipur so far.

Delhi, Infected-6923 ઃ Here on Sunday came 381 cases of infection. The worst affected area in the national capital is Delhi Central. There are 184 patients with corona here. The most affected is Northeast Delhi. There are 25 patients here. The city has recovered 2069 infected so far. While 73 people have died.

Bihar, Infected-629 ઃ Corona infection was confirmed in 18 patients here on Sunday. It found 7-7 patients in Saharsa and Madhepura, 2 in Darbhanga, while 1-1 in Begusarai and Araria. In the last 24 hours 51 patients have recovered. The state has 32 migrant workers in 50 transitions in two days, returning from other states.

Corona hangs in the paramilitary forces does not take the name. More than 600 people have been infected so far. Of these, 96 per cent are from Delhi. On Saturday, reports from 62 CRPF, 35 BSF, 13 CISF and 6 ITBP personnel came positive. All the 100 jawans found infected in ITBP so far are from Delhi.

Lockdown every Sunday in Kerala

There will be a total lockdown in Kerala every Sunday from today to prevent the transmission of corona as well as to keep the environment clean. The government issued the order on Saturday. The government has decided to close all shops except essential services. According to Chief Minister Pinarayi Vijayan, on May 7, the reports of two Indians from the Gulf countries came positive. One of them came from Dubai to Kozhikode and the other from Abu Dhabi to Kochi. The number of corona patients in the state has risen to 506.