Oleh www.ojasjobs.com
14 May, 2020
Join WhatsApp Group
Important announcement by Chief Minister Vijaybhai Rupani Decision to give loan up to one lakh rupees

Admannibhar Gujarat Sahay Yojana announcement
More than 10 lakh people will get the benefit of the scheme.
Decision to give loan up to one lakh rupees
The loan will be given at the rate of 2%

Loan up to one lakh rupees will be given only on the basis of application
Union Finance Minister Nirmala Sitharaman addressed a press conference in New Delhi on Wednesday afternoon in which she outlined a package for the Self-Reliant India Campaign.
Important announcement by Chief Minister Vijaybhai Rupani Decision to give loan up to one lakh rupees

In his national address on Tuesday, Prime Minister Narendra Modi said that Rs. A package of Rs 20 lakh crore has been announced, which is about 10 per cent of the country's total GDP, and will be detailed by the finance minister in the coming days.
Earlier, the central government had spent Rs. A package of Rs 1 lakh 70 thousand crore was announced.www.ojasjobs.com 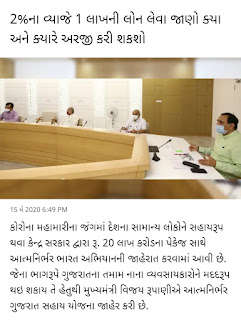 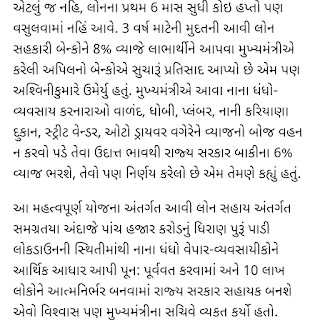 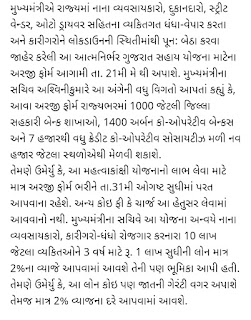 Apart from this, the Reserve ank of India (RBI) has set aside Rs 1 crore for mutual funds to increase liquidity in the market. 50 thousand crore was announced. Apart from this, measures like relief in loan repayment, reduction in loan rates, etc. were announced.
The main points of advertising

Prime Minister Narendra Modi, in consultation with various ministries at different levels, with various sectors of the society, based on inputs received Rs. Announcing a package of Rs 20 lakh crore to revive the economy and promote local industries, Rs. 20 lakh package is being announced. Economy, infrastructure, technology based system, demographics and demand base will be based on land, labor and legal reforms. Emphasis will be placed on e-off-doing business. Self-sufficient India. India, which will make its contribution to the global supply chain In. Poor welfare package 'was announced, Rs. 52,606 directly credited to the beneficiary's account. The daily advertisement will take into account the elderly, poor, foreign workers and the disabled. 18,000 crore refund was given,

which benefited 14 lakh taxpayers. A loan-free loan of Rs 3 lakh crore, with a term of four years and no interest for one year, can be availed till October. Eight lakh crore beneficiaries of 'Ujjawala Yojana' will be given free gas cylinders for a total of three months. MSMEs under pressure will be given Rs. 20 thousand crore secondary-loan will be given MSME units will be redefined, now units will be redefined on the basis of turnover in addition to investment; The definition of manufacturing and service units will be consolidated at Rs. Due to having an investment of up to Rs. Turnover of up to Rs 5 crore will be defined as 'micro, small and cottage industries'. Out of MSME units, outlay of Rs. International public tenders will not be invited for government tenders up to Rs 200 crore.

Government of India will provide conditional share of employers and employers till August. More than 72 lakh employees will benefit 3.66 lakh units. Rs. 90,000 crore will be provided to NBFCs, housing finance companies and micro finance institutions. A special liquidity scheme of Rs 30,000 crore will be introduced. The Ministry of Urban Development will issue guidelines to the state governments and provide relief to builders for six months by considering Covid-19 as an 'Act of God'. Financial liquidity of Rs 50,000 crore will increase. By December 31, 2020, the 'Dispute to Trust Scheme' has been extended. After all the announcements, Rs. Where the Rs 20 lakh crore will come from will be announced as the date for filing returns has been extended. Collection figures will be available only after June 30