You need to update your WhatsApp version to the 2.19.221 Android beta version in order to use the Fingerprint lock feature. ... is only required when you want to open WhatsApp.

WhatsApp is testing a new beta update for iOS users ... users see the WhatsApp logo whenever they open the app on ... This was first available on the beta version for Android.

WhatsApp can soon be unlocked with the fingerprint scanner on Android devices. After introducing Touch ID unlock on iOS, the feature would soon be available on Android. WhatsApp is currently testing the fingerprint unlock feature on its beta Android app with the build number 2.19.221, reported WABetaInfo 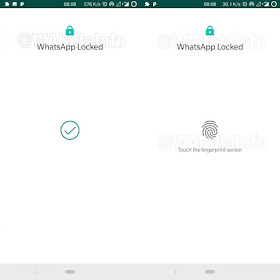 How Can Use Fingerprint Lock On Whatsapp ?

After enabling the Screen Lock feature for iOS beta users (more than 3 months ago), WhatsApp is finally ready to release it for all Android users! ... You need to update your WhatsApp version to the 2.19.221 Android beta version in order to use the Fingerprint lock feature. 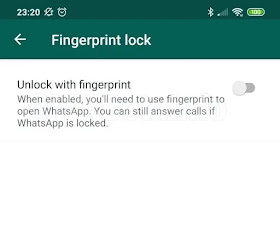 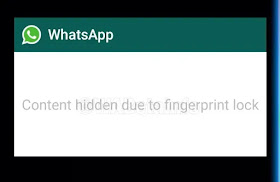 Having biometric unlocking on your device is a necessary security inclusion that ensures that valuable data on your phone stays secure. The latest WhatsApp beta for Android increases your device security by adding the much-anticipated fingerprint locking — which is available starting today.

Despite the fact that a Dark Mode is probably a little more requested, the fingerprint unlocking has been in the pipeline for some time — it even made it to iPhones in a previous beta update.

Spotted by WABetaInfo, the new app authentication method is available if you update WhatsApp to the 2.19.221 Android beta version. It shows in the app settings as Fingerprint lock and should be rolling out now if you are already enrolled in the beta program.

Once you’ve configured the Fingerprint lock in your updated version of WhatsApp, it’s worth noting that you will still have the ability to read messages on the lockscreen and notification shade. You’ll even be able to use the Android quick reply to respond to messages and chats. Therefore the Fingerprint lock only applies when you want to open the app.